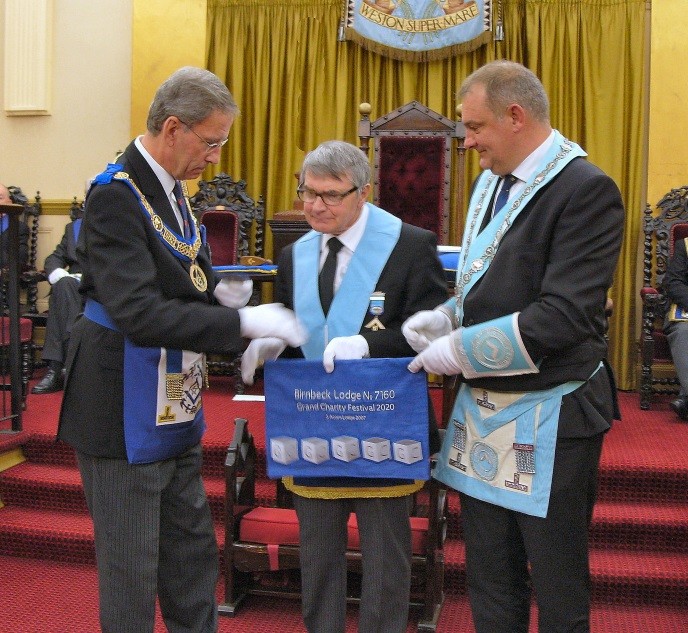 As we have described, Charity is a mainstay of Freemasonry. Each Lodge has someone called the Charity Steward whose job is to encourage the membership to give freely and organise specific fundraising events. These are normally two a year, one is a Christmas event and leads us into the Seasons Festivities and one is traditionally held in the Summer recess.

These events are purposely designed to be sociable and enjoyable, as well as raising money. The Charity Steward controls all the fundraising and charitable work that goes on in the Lodge. Freemasons practice and firmly believe that giving is a virtue and it is always better to give than receive. It is this principle that binds Freemasons together. It is not unusual for collections and appeals to take place for specific purposes, for instance the first money to be received by the Somerset Flood Appeal was from Local Freemasons as were donations to the Tsunami Appeal.

Freemasonry is devoted to the promotion of unselfishness and the ethics of welfare and happiness of all mankind. We believe and practice, that is is more honourable to give than receive. Did you know that all donations from Freemasons, come from the members themselves? No money is raised from outside! Freemasons are also one of the quickest and most generous responders to disasters such as the Somerset and Cumbrian Floods and the Tsunami and Hurricane appeals and We are an avid supporter of both Air Ambulances covering the Somerset area not to mention many local and national organisations requiring assistance.